skip to main | skip to sidebar

I've been carrying this newspaper clipping around in my purse for over a year. 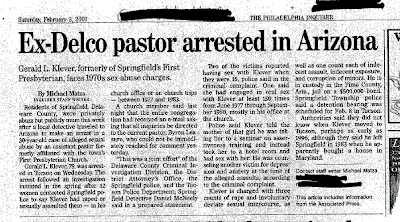 I still remember the shock I felt on that Saturday morning last February when my mother, so tentatively, asked me whether I'd seen the paper and slid it across the table to me. I remember the horror I felt upon reading the article and learning that not only was I not the only one, but that the others who had come forward suffered much worse abuse at our former neighbor's hands than I did. I remember the irrational guilt I felt at not having known, and at having done nothing at the time to prevent it. I remember sitting in my mother's kitchen and spilling tears in a way I haven't done since I was a child.

I remember the urgency with which I sought out the lead detective in the case, and my insistence at meeting with him as soon as possible. I remember sitting in the Springfield Police's interrogation room with this kind, dedicated detective -- who had taken seriously the claims of, at first, a single woman reporting crimes that had taken place over 20 years ago -- and trembling uncontrollably as I told him my story. And I remember his nods of recognition, his resolute validation of a story that he had already heard in various forms from over a dozen women.

After 15 months of pre-trial hearings and motions, rescheduled court dates, and general delays of one kind and another, this matter will finally be before the courts a week from today. The deputy district attorney prosecuting the case phoned me last week to inform me of the date, and also to let me know that the defendant's attorney has asked for a "non-trial resolution" to the matter -- in other words, a plea agreement.

I will be there, not as a participant in the case, but as a witness to Gerald Klever's admission of guilt and accountability. I will look him in the eye as he leaves the courtroom, hoping that he recognize and remember me, and that he take responsibility for the harm he has done. I will look his wife in the eye, if she is there, and insist that she own up to her years of silent complicity with her husband.

But mostly I will be there to stand with the other women, members of his former church, who were brave enough to come forward in spring 2006.
Posted by RuthWells at 10:45 AM

Oh Ruth. My thoughts are with you.

How very brave you and the other women are, Ruth.

My thoughts will be with you next week, as they are now. This is not and will not be easy, but this wretched man should be held accountable for what he did, and I pray that he will be.

Wow. i had no idea. I've read about this total piece of crap before.

I think you are so very brave for doing this! I will be thinking of you.

You are both beautiful and a brave soul. We are here for you and support your efforts to bring this person to some sort of justice.

Thinking of you. Sending you strength. Wondering how many others of you I know too, heart sinking at the thought.
Thank you for putting this out there.

I read this story and somehow knew that this was true. But, of course, wouldn't have asked or even approached it with you.

Ruth I am the primary victim in this case. I was the first to come forth. I am trying to contact you via email. I would like to share stories with you and explain how this has all come to be. If you believe in miracles my friend, this is one. I am truly honored to have found you. I've been alone in this for 30 years. I have only be in contact with one other victim--the other one in the papers. Please check your email and contact me. I have never commented on a blog before so please excuse me if I am saying too much. I just want to connect with you if possible before Friday.

Serenity -- I don't know if you'll read this, but I want to applaud your courage for being the first to come forward. I hope this helps you and the other victims find some sort of healing.

Ruth, good luck. I'll be thinking of you on Friday. You are a strong and brave woman.

Good grief, so so sorry.

We, the members of the church where these crimes occured, are with you in prayer. Please know that you are not alone, and finally justice is being done. Thank God someone came forward and started this process. May your healing begin.

I don't know if you'll even see this, but I came across your post today after finding out my neighbor is this man. He lives in my building here in Philadelphia and I assumed was this nice old man that I regularly said hello to and helped carry his groceries once. On a whim today I decided to look up sex offenders in my area and was shocked to see my building's address on the list. I was even more shocked when I clicked on the picture. I feel sick knowing what he's done to so many and sick that I extended a helping hand to him. I'm so sorry for what he put you and so many others through.

Lanie, thank you for leaving a comment. I didn't know that he was still in Philly, and I can imagine your shock.

One of the reasons his sentence was so lenient is that he convinced the court that he was in very poor health. I'm curious whether you have observed this?

Ruth,
Thank you for responding. He does not appear to be ill as far as I've observed. I often see him out on long walks. I was actually surprised when I realized he was nearing 85, I would have thought maybe upper 70s. He's definitely not frail or weak. The time I helped him with his groceries was more due to the amount he had and the stairs in our lobby are a little steep.
If you'd like to correspond any further, please feel free to email me at kousa726@gmail.com.
Lanie

2011 PKD Fundraising: In My Father's Memory

Click here to read his obituary or make a donation. All proceeds benefit the PKD Foundation, where 80% of the annual budget is spent on direct research and patient services.

Coming Back for Seconds: My Favorite Posts

How I Spent My Summer 2007 Vacation (Archives)